I have been fuming and festering about the Trans-Pacific Partnership negotiations. The relative secrecy surrounding the exact terms of the proposed agreements, and the lack of ability for even elected officials to speak clearly about it, have been disturbing to me. So I created a petition to the White House to publish the details of the agreement online for citizen review and comment: http://wh.gov/lPVjg 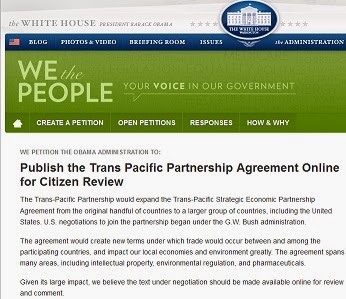 Self Satisfaction, Human Rights, and the Sochi Olympics

This morning I opened a link that my husband had shared on his Facebook page and texted me to tell me it was "so funny". It was a link to the Russian police choir singing Daft Punk's "Get Lucky" for the opening ceremony of the 2014 Olympics in Sochi. Now, I've been following the unfolding of the spectacle that is the Sochi Olympics the way I follow most things: Tangentially, through short video clips, pithy updates on Facebook and Twitter, and a long form article here and there, usually guided by my husband, who is a much more avid reader of news than I. In addition, the Olympics has never held much interest for me, being that it involves "sport", the ignorance of which has comprised a closely held piece of my self image.
However, the Seattle Seahawks going to, and then winning, the Superbowl this year has tempered some of that cultivated ignorance the past few weeks. I avidly watched the live stream of the Seahawks parade, surrounding myself with the intensity of a community joyously celebrating, together, the culmination of a huge amount of work done by the coach and players of the team. Of course there was the running social commentary in the back of my mind: The near complete omission of our city's female champions, the Seattle Storm; the concussions, violence, and brutality of football itself; the social justice implications of black and working class men performing for a rich audience; the feminist implications of the primary female presence being the Sea Gals cheerleaders. But this year all that was blown away for me by the sense of people coming together in joy, people from all perspectives and walks of life gathering peacefully in a world overflowing with daily displays of suffering and violence.

So it was in this afterglow of shared excitement that I watched the Russian police choir perform one of my favorite songs at a hotly debated Olympics opening ceremony. Russia's oppressive regime has been in the spotlight ever since Russia was chosen to host the Olympic games. Many people, including myself at times, seriously question the wisdom of holding the games in a place that is so hostile to the LGBT community, whose government imprisoned members of a protest band for what in the U.S. would probably be considered a harmless, if offensive, prank, and which now famously was not ready for the influx of reporters and other visitors ahead of the 2014 games. When I opened the link to watch the video of the police choir performance, I fully expected to have a laugh about the cute buffoonery I've come to expect from this year's Olympic spectacle. Instead, though I did laugh at first, within about a minute I burst into tears. Tears of joy, watching these men, some of whom were clearly extremely uncomfortable, sing a song symbolic of love, dreams, rebirth, and tenacious clinging to one's personal identity in a world that offers so many ways to leave it behind. I know, I probably sound overly earnest here. It is, after all, a simple pop song about "getting lucky", right? "I'm up all night to get some/ She's up all night for good fun", end of story, right? But as I watched Russia's police choir performing, in the context of both #sochiproblems and @SochiProblems, the recently released former Pussy Riot members' press tour, the pomp of the ceremony and the rubble it didn't quite succeed in distracting us from, the entire modern history of Russia washed over me and I just cried. Some of the men in the choir were into it, singing and grooving like veteran pop stars. A few looked like they wanted to bop a little but couldn't quite let go. And then there were the ones who looked slightly terrified, definitely ill at ease, and like they were just there to carry out orders. They seemed to me in those moments to be watching their country shift and change into something unknowable, a Russian version of Archie Bunker being ordered to sing "Staying Alive".

Many of us who care deeply about human rights wish the International Olympic Committee would only choose countries with "good" human rights records. Countries that allow free speech, that don't discriminate so boldly against a variety of marginalized groups, countries where mayors don't proudly declare about LGBT people "... we don't have them in our city". Setting aside the truth that human rights is an issue in every country, including the United States, let's think about that for a moment. Do we really want the IOC to exclude countries deemed unworthy by some set of self satisfied moral standards? For an event that, in ancient times included the calling of a truce between warring states so that athletes could travel and compete in peace? Or, can we instead allow the events to open us up, crack open all that grief and rage, all the old wounds we all carry and inflict on one another, opened to be healed if even for a moment? After all, as the song goes, "We've come too far to give up who we are/ So let's raise the bar and our cups to the stars".
Posted by Katie Kadwell at 1:41:00 PM No comments: