The other day we went out as a family for poboys. When I ordered the waitress suggested I might want a half sandwich instead of a whole. For some reason I felt the need to say I had skipped lunch, which was true, but I felt a bit embarrassed because I do tend to eat a lot in any case.

Anyway, while we were waiting for our food Brent went with the girls to look at the fish tank and I sent him the text pictured below. But his phone was laying face up on the table, which I didn't notice until the after the waitress had brought our sodas... the whole rest of the evening I kept wondering if she had seen it. 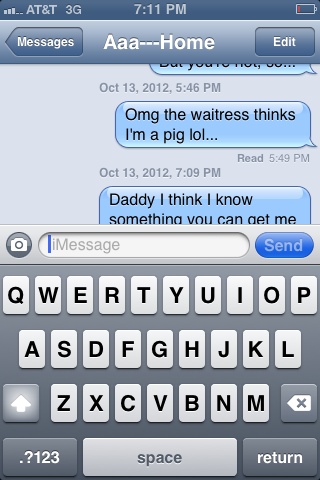 Now that Willow is in Kindergarten and we're settling into a new routine as a family, I"ll be spending a lot more time with Grace just the two of us. I love this, because I'm noticing how much I don't know about Grace and I feel like I'm just getting to know her in so many ways.

Mondays and Fridays will be my days to work hard in the garden with her, and Wednesdays and Thursdays are her mornings at preschool, so Tuesday mornings will be her time at the park. Brent will be taking Willow to school that morning and volunteering in her classroom, and Grace and I will go to the park. My goal is to have gone at least once to every park in the city that has a play ground with her by the time she is in Kindergarten. I don't know why I'm fixated on this, but I am, so I'm going with it.

This past Tuesday we walked to the place we call "The Nearby Park", since it is mere blocks away and it's a really perfect walk for a two year old. In the picture below Grace is on the "wiggly seat", which is a seat that hangs from cables, with a rope ladder going up to it. Grace loves it, and loves to be wiggled on it, but is not yet ready to climb up the rope ladder all by herself. (Though she is now very adept at climbing up the ladder at home into her sister's top bunk!) 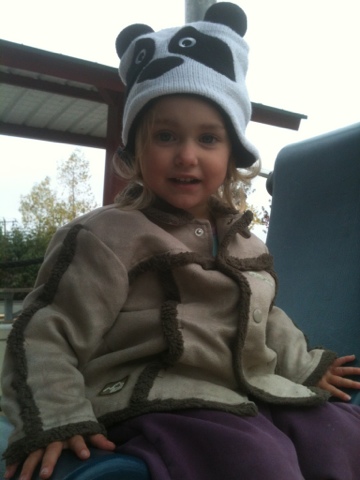