One of my favorite people in the world is my close friend, Tina Zucchero. Her last name derives from "sweet" in Italian, as I understand it, and this well describes her. She is wonderfully kind, and sweet, and heartfelt. She posted a very sad but also inspiring and heartwarming note yesterday on Facebook, again about the Chick-Fil-A kerfuffle. Is kerfuffle too whimsical a word? I don't know... read on and decide for yourself. 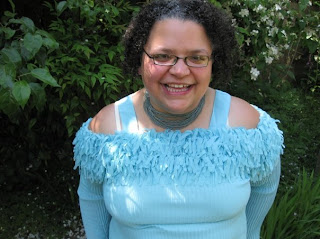 "A Note from my Soapbox" by Tina Zucchero


I was called the “N” word again yesterday.  I was boarding a bus when a man suddenly decided he wanted off the bus, pushed past me and said, “Out of my way you fu*king N- b*tch!”  The really cool parts of this experience were the few people who rushed to my defense.  Strangers I never met yelled at the guy and encouraged me to ignore that “ignorant ass”!  One older man looked at me and said I was his “sister under God”.  That made me smile!  It was a really cool experience, especially because in the past I have witnessed passivity or the bystander effect from people on the bus when things are not comfortable.  I have seen a lot of looks from fellow passengers that said, “If I ignore it, it will go away” or “This is none of my concern”.  So to have not one but several people boo at the guy and offer encouragement truly felt good.

This is not the first time this has happened of course and it more than likely and unfortunately will not be the last.  Most of the time I let it roll right on by because I know right then and there that it is a ridiculous statement and hate will not prevail.  Like last year when the guy came into my store and wanted to return something he purchased four years prior.  He was not happy with my ‘no’ and so, rather cowardly in my opinion, left the store and called back to leave me a message calling me some pretty derogatory names.  I laughed out loud and to this day still poke fun at the whole situation.  My friends and coworkers jumped to my defense there too which again, felt good and proved my point that hate will not prevail.

I am a woman of mixed race. Of what races, I am not exactly sure because I was given up for adoption at birth and I have no personal information other than the date and place of my birth.  I was adopted into a very white family with an Italian dad and a white southern mom in Philadelphia, PA.  This was 1969 and it was still a time when pregnant girls were sent away to have their babies and friends were told they had gone to visit ‘family’.  This is also just two years after Loving vs. Virginia, when Mildred and Richard Loving, a mixed race couple won their right to be married.  While anti-miscegenation laws were beginning to be over turned, a person’s race could and would still play a key role in the judgment of individuals.  The family I grew up with refused to acknowledge that I was anything but white.  I had aunts and uncles and grandparents that were very comfortable using the N-word (not at me, but around me).  Until I got brave and started asking them not to. There were many family rumors about my adoption.  One in particular said that I was given up for adoption because my mom was white and my dad was- not.  I often wonder if racism is the main reason I have never known my birth parents.

Today I keep thinking about having just been called the n-word again. Now, I am not thinking about it in terms of having been victimized. I am stronger than that.  Nor do I hate the individual that called me that.  Rather, I am thinking of it in terms of this country and how as a people we always seem to find someone to hate and fortunately we can twist words in a bible and suddenly have God on our side of the hate line.  At least that is what it looks like from where I stand.  When anti-miscegenation was coming to an end in the 60’s, there were people carrying signs of hate and quotes from the bible that spoke about the sin of mixing races.  People of all types shouted their opinions on the radio and television and in newspapers.  Jerry Falwell preached that allowing mixed marriages could destroy the white race forever.  When the judge sentenced Mildred and Richard Loving to a one year prison sentence for entering into a mixed race marriage (which was suspended for 25 years on the condition that the couple leave the state of Virginia), he used God in his reasoning: “Almighty God created the races white, black, yellow, malay and red, and he placed them on separate continents. And but for the interference with his arrangement there would be no cause for such marriages. The fact that he separated the races shows that he did not intend for the races to mix.”  In this man’s interpretation of God, I should not exist.

So by now we have all seen “Gods reasoning” in being for or against gay marriage.  We have heard and read the passages in the bible twisted just so to fit either side nicely.  That’s our prerogative.  That is up to our own individual definitions and interpretations- our own opinions.  But what happens when opinion becomes a tool in which to hurt another individual?  What happens when it hurts a whole race or group of people?  Where is the line that defends what is right vs. what is opinion?  No one on that bus last night looked at me and said, “Well, sorry lady, but the guy is entitled to his opinion.” which is an absolute truth that I will not deny.  Instead, they did what I hope I would have done in the same situation.  They saw that someone’s outspoken opinion could have brought me down and they worked to counteract that and build me up.

When the Westboro Baptist Church pickets funerals and high schools and other public events, they have free speech on their side and they are most certainly entitled to their own opinions.  But it doesn’t stop other individuals from putting up barriers between the picketers messages of hate and the families.  Those individuals that use themselves as shields against such hatred are building up.  But hatred is not always as clear as a WBC picket sign.  When it is subtle, we can pretend not to see it.  When it is opinion we can forgive it. We can avert our eyes and hope that someone else will do something.  But can we really allow ourselves be taken over by the bystander effect?

How many bodies from those that have been pushed down do we have to step over before we look down and realize that we are the ones to do something?

I will not support or vote for a person, group or company that uses God as a tool to spread hate and keep others down.  I hope you choose the same.

Tina
Feel free to share note where you think it may spark good conversation.