Yes, I think so too.

The issue of "easy money" is getting some attention from someone within the fed, and he's making his position known.

The issue of the savers subsidizing the borrowers is an important one, and one that I hope will get more and more attention. Thank you, Thomas Hoenig.
Posted by Katie Kadwell at 9:33:00 AM 1 comment:

Over the past few weeks I've been paying closer and closer attention to the debt talks. I voted for Obama in 2008, and expect I will again in 2012. Though I haven't agreed with everything he's done, and would have hoped for him to be less yielding in some negotiations, I've also admired his commitment to bipartisan negotiation and compromise, which I think is a good healthy approach to take over the long haul. The health care overhaul, for example, contains several Republican ideas, despite the current GOP characterization of it. I've also felt that Obama has done an excellent job overall in the face of huge pressures, including, unfortunately, GOP intransigence. Today, he walked out of a meeting, angry and apparently fed up.

Well, I'm fed up too, and I felt very sad when I heard the President had walked out of the meeting. Not because he abandoned the negotiations, but because I felt for him - felt how deeply upset he must have been to do that, while saying "This may bring my presidency down, but I will not yield" on making a short term debt ceiling deal. The GOP has made it abundantly clear that they want Obama to be a one term president, and that they will do whatever they have to, including putting the U.S. economy in even deeper jeopardy than it is already. Even The Economist and David Brooks think the spectacle is crossing a line, and I hope we the people hold them accountable in 2012.
Posted by Katie Kadwell at 8:27:00 PM No comments:

...is so surreal. Here is a screen shot of my twitter feed as of about 15 minutes ago: 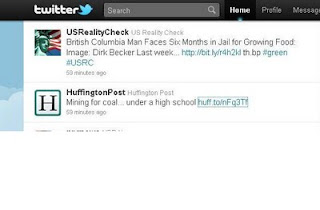 While someone in British Columbia is being threatened with jail for growing vegetables, a mining company is preparing to mine under a school in West Virginia. The mind boggles, truly.
Posted by Katie Kadwell at 4:00:00 PM No comments: