As I've thought about it more I am realizing that it will become obvious as Willow gets older what her needs are as far as education. I suppose right now my task is to help her learn and experiment, and when the time comes we'll look at schools. Brent and I spoke about schools and he said something about language immersion that made a lot of sense to me, and I think hit on why the whole idea doesn't really resonate with me. He said that a language immersion program puts a huge emphasis on one thing, being language. I agree with that. And that is why I think I balked, it seems like such a great idea but then which language would I want to emphasize to that degree? Brent said it makes more sense if we traveled abroad more, but other than that why emphasize it that much, especially so early. And, it seems most of the language immersion preschools (that I hear about, I haven't done any of my own research) are French. Which is fine, but really, French? How practical is that? Spanish or Chinese make a lot more sense... even Hindi makes more sense than French. That's all I have to say on that topic right now.

I feel horrible to admit this, but Willow has been driving me crazy the past few days. She is teething, her 4 front teeth are coming in, so I must be empathetic but my god. Everything is a major drama, where usually she might protest a bit if I won't let her play with the object of the moment (sharp knife, box of tissues, a book I may not want destroyed), lately she just full on cries. This is something I'm not used to and is not fitting in with my plan. It is definitely not gelling with the mood I've been in lately anyway, which has been rather dark and I am not feeling very appreciative of the oncoming winter. I am not feeling much in a "being" place, which the gray days invite, instead I've been finding myself fighting that. So I've been feeling grumpy, and the babe is teething waking up more than usual at night, in addition to walking more and more so she is not interested in things like eating and sleeping, which makes her grumpy also. Not a good pairing lately. I've been remembering babysitting and all the times I wondered why parents would be so impatient with their children, having that sort of dismissive snap to their voice, and now I know... it just gets old sometimes. Old in a way that cannot be known by anyone but a parent or someone who has cared for children day after day after day, full time. The constant desire to have everything except the approved toys, the continual demands, irrespective of my own needs like going to the toilet or having a meal. Old old old, it is feeling today. And yet I must remember how short this time is, Willow has already changed so much in this first year, gone from a newborn who couldn't even roll over or communicate except for crying to a walking, babbling, pointing little girl who loves her cat and her dog and communicates with sign language and little grunts and attempts at words. She loves to hug her animals and her baby dolls, and hates having her diaper changed. She tried to take off her shirt today at dinner and ended up with one arm in the shirt and one out, eating that way without a care. She loves avocados and bananas, and lately has not been liking tofu which she usually does, but she also loves canned beans. And someday soon she'll be talking and walking without falling, and she'll no longer be a baby. That time is so near... and though I don't know whether I'll miss the demands and whines and cries, I know I'll miss the babbling and shrieking and sweet little noises that will inevitably give way to talking.

As I close, I must mention the savior this week as I've been in my dark mood. The Daddy, Brent, has been so wonderful and spent a lot of time around home with us, which has been very nice. He's taking a bit of a break from writing since he's finished his book, and it has been really sweet to watch Willow bond with him even more. She really has fun with her Daddy and they have special games they play together that I don't do. He is also very good at helping her settle down and go back to sleep when I've had my fill in the middle of the night. I am so blessed to have such a wonderful husband, and Willow is a very lucky little girl to have such a daddy. 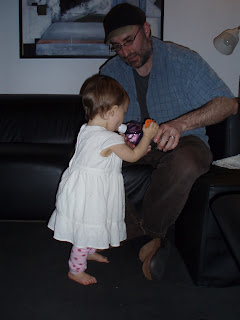